Elie Renardat-Fâche is huge! If he was American, people would ask him if he plays in the NBA all the time. Fortunately, he lives in the tiny mountain village of Mérignat, population 100! Located in the heart of the Bugey, this relatively obscure region of France is known for its sparkling Cerdon. Universally referred to as "breakfast wine" by happy go lucky (and borderline alcholic?) fans of the style, Cerdon is the result of a méthode ancestrale fermentation, and is always light in alcohol, high in sugar and giving in fruit. But great Cerdon also packs the heavy minerality and acidity to really uplift the bottle.

Domaine Renardat-Fâche is widely considered to be one of, if not the best Cerdon currently produced, and the way we started working with them is a cool story: at a birthday dinner for my grandfather at the original Daniel (now Café Boulud), Daniel himself came out to wish Sam a happy birthday and to complement him on his son's accomplishments (my grandpa was very proud that day). This was around the time Daniel was prepping his second restaurant, and for the opening, he told Joe he wanted the Cerdon that legendary chef Alain Chapel was serving in Mionnay.

Joe and Denyse didn't want to call Alain Chapel's restaurant just to ask what their Cerdon was. So Joe, as a pioneer of the world wide web, found a link to an Australian restaurant in the Bugey called Le Boomerang (France's first and only Australian restaurant, which sadly closed a few years ago) and asked owner Rose-Marie Perkins if she had any leads. She told him that she worked with someone else, but that Chapel's Cerdon was from none other than, you guessed it, Alain Renardat-Fâche! Joe got in touch with him, and the rest is history.

SIDE NOTE: We actually ate at Le Boomerang once, and had ostrich steaks. I remember it being really good.

Our visit started in the Renardat-Fâche tasting room, which brought back vivid memories from my childhood.

At the time, my sister and I were obsessed with Cerdon because, well, it's SO DELICIOUS! We'd drink as much of it as our parents would allow (which was probably way above the average of NONE), at any chance we could get. Anyway, while scoping the room out and remembering my youth, I spotted this oddity:

Turns out they've been making a Chardonnay for years, but it's always been in tiny supply. It also turns out that 2006 was the last year they made it, so I guess that's that.

2012 factoids: Budding was very good but unfortunately, it's looking like a low yielding year for the Poulsard. The Gamay suffered from a lot of mirandage, a term that does not exist in the English language but means tiny berries as a result of difficult flowering. No hail, a bit of frost... And if you didn't know, after a six year conversion the estate is finally certified organic as of the 2011 vintage! Also, for the first time EVER, Elie is offering up MAGNUMS! He feels that you can actually age these a bit, which is rarely the case with 750's. Made to order, so contact us if you're interested.

Our next stop was to the cellar, where Alain and Elie broke down the incredibly technical nature of making Cerdon: everything starts at harvest, where they intentionally don't pick at optimum ripeness (10-11% potential). The grapes are destemmed, then fermented in temperature controlled, stainless steel tanks. After press, they add 40-50mg of sulfur and let the wine go through a slow, 3 week cold maceration. Elie has experimented not using sulfur this early on, but the length of maceration has always led to oxidation...

A spontaneous, semi carbonic fermentation occurs, which they stop at around 6% alcohol. After that, they lower the temperature of the tank between 0 and 20 degrees celsius. This helps block the fermentation without sulfur, a major innovation in methode ancestrale winemaking (Elie brings up not-so-found memories of his grandfather's extremely sulfury Cerdon in his interview). Alain and a few of the guys he went to school with were the first to use this technique in France.

At this point the yeasts are dormant, so they gently filter the wine before rebottling and letting it referment in bottle. In Champagne, a wine can be disgorged because it is dry, but since there is so much sugar left in a bottle of Cerdon, they always keep the storage cellar at 5 degrees; otherwise, the yeasts would become over-active, resulting in deviant wines and exploding bottles. Also unlike Champagne, bottles are stored standing up rather than on their side.

If they were laid down, the bubbles would become bigger, stronger and more violent and that would not be a good thing. Out of curiosity, I asked if it wouldn't be simpler for them to just have all of the wine in one big vat instead of bottle by bottle. Alain responded "of course", but that they don't do it for two reasons. The first is that historically, a French sparkling wine had to ferment in bottle. But more importantly, all the fruit aromatics of the Gamay would be lost.

They then empty each bottle by C02 and gently filter out the deposits left from the re-fermentation. This is done 8000 bottles at a time, with everything poured into a blending vat. The content in the vats represents a blend from 5 or 6 separately vinified parcels, bringing balance and elegance to the final wine. In the end, they make sure the final fermentation is never over 7,5% alcohol, because even at 8% you'd lose a lot of fruit. The blended wine is then rebottled and corked. Did you know that Champagne corks look like this before they are bottled:

Seeing what Alain and Elie are doing in the cellar makes it easy to understand why their wines qualitatively stand out of the pack. Few go to such lengths to produce this style of wine in the region; though it technically can't be labelled as Cerdon, the majority of regional sparkling, sweet, low alcohol wine is being produced with hefty doses of sulfur to halt fermentations and using the chermat method to add carbonation. These practices are is large part responsable for why the region has developed a bad reputation in France.

After our oenology lesson, we set off to our first vineyard site!

We began by visiting this 3 hectare parcel, which happen to be the first vines Alain bought when he was only 14 years old! It is steep!

Because they don't use herbicides, these inclines make soil-work decisions very important

"We're only 5 years into working organically, and it's still a learning process. We're the only ones to plow here, and maybe this year we should have done less"

The vines are spread over 25 zones of the village, and range from 250 to 500 meters in altitude. Combined, the parcels face every type of exposition possible. Everything is hand harvested.

A big part of why Alain and Elie's Cerdon is so unique is that they are among a tiny percentage of vignerons who blend Poulsard into their Gamay. Other than the Jura, you won't find Poulsard anywhere else. Still, it only represents a tiny part of Bugey's vines: only 8 hectares are planted, and the Renardat own 3. Though it was traditionally planted in the region, Poulsard is fragile and low yielding so people ripped it out to favor the more productive Gamay.

We continued the visit with Elie wanting to show us an "experiment" they'd started in the Spring. It involves a trial with biodynamics on 10% of the estate: 4 parcels have been split 50/50 between organic and biodynamic viticulture to observe any differences.

Only a few months into the comparison, the major thing Elie has noticed is that on the biodynamic vines, the leaves seem to naturally spread out more and curve themselves inward to better absorb the sun.

Why? That's beyond them. Alain, who has always been a man of science, has been pleasantly surprised by the whole experience:

"I don't understand it, but I see the results and it makes me want to pursue things further."

Elie then pointed out:

"Human beings have lost the inherent instinct of being in sync with nature. An animal knows when a storm coming, where to find the food he needs... For some it's never left, but it's something most of have progressively lost. But I believe it's slowly coming back."

We finished the tour of the vines, then got to taste a bunch of pre-blended Cerdon before eating lunch. I was very excited, because Elie had promised me that we would taste the dry, still Gamay they make for personal consumption. I'd actually been thinking about it for over a year now (when he'd mentioned it in his interview). It did not disappoint: 11% alcohol, light and fruity but it still has a cool expression of terroir that differed from the Beaujolais. It was quite easy knocking back an entire magnum; Elie is actually considering bottling and selling small quantities of it in the future, and I certainly hope he does!

After lunch, Maya snapped some pics of the Renardat-Fâche's dogs Rapunzel and Guinevere:

Who's next on deck? Big man Franck Peillot, that's who! Stay tuned. 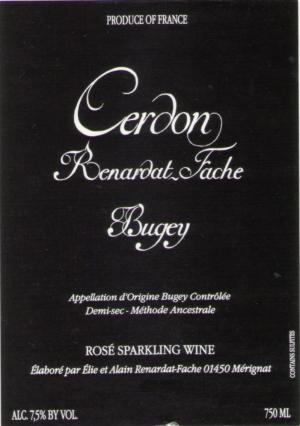 Discover the origins of "Méthode Ancestrale" and why using Poulsard to make Cerdon matters in Elie's interview on the Renardat-Fâche profile. And while you're at it why don't you read his wife Christelle's 2011 harvest report?

Don't forget the save the date for this upcoming week of events for PIH in honor of Joe:

Rouge Tomate, 10 East Sixtieth St – From October 22nd to October 29th the restaurant Rouge Tomate will offer a selection of ten Louis/Dressner wines, by the glass or bottle, a portion of the proceeds going to PIH. (646) 237-8970